No Result
View All Result
Home Nearby Beaufort

Thousands without power Monday after storm sweeps through S.C. Lowcountry 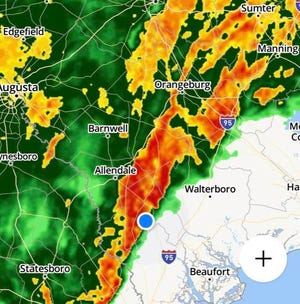 Thousands of people in the Hampton County and Lowcountry area woke up without electrical power Monday morning following a line of severe storms that swept through overnight.

RBC Heritage is in full swing

Savannah Feed the Hungry helps over 100 people with free gas

A powerful cold front moved east into Georgia and South Carolina on Sunday evening, bringing with it heavy rains and strong winds, leaving thousands of residents without electrical power but with no major structural damage.

Palmetto Electric Cooperative reported that it had a total of 25 line outages, impacting 1,492 member locations, with 1,065 of those in Hampton County and 389 in Jasper County.

“Please stay off the roads! Downed trees and power lines. First Responders are out trying to repair power lines and responding to emergency calls!”

In Hampton County, winds speeds averaged 27 miles per hour, with gusts up to 45 m.p.h. at times, reported Peeples.

“We had no significant damages reported to any homes, but there are trees and power lines still down,” said Peeples.

Most of these outages were reported just before 4 a.m. Monday. By 10 a.m., Palmetto Electric still had 1,151 homes and businesses without power and had repair crews working in numerous locations around the area. At 10 a.m., Dominion Energy was still reporting 387 customers without power.

Both utilities posted on their social media pages that they were aware of outages and working hard to repair them, with some outages expecting to last into the afternoon.

In Jasper County early Monday, residents awoke to the sound of the wind and even some trees being toppled.

Peggy Hartzell Alsop, a Ridgeland resident, was sleeping in the early morning hours when the cold front began to creep through the area, leaving behind tree damage in her yard.

“I heard a big noise,” she said. “I knew what it was. The tree did not come through the roof, but I heard it hit the roof. My chihuahuas went berserk. It was so loud.”

Alsop was one of many residents who said they had fallen trees around their yards and on their homes.

Shanan Singleton, a Wagon Branch resident, said trees were down all around her neighborhood.

“There was lots of wind howling and beating against things,” she said Monday morning. “I have yet to go outside.”

Due to the high winds, road conditions and power outages, all of Jasper County’s schools were closed for the day. Several schools still offered e-learning options for the day, including the Jasper County School District and Royal Live Oaks Charter School.

Captain Randy Hunter with Bluffton Township Fire district said the town was lucky and had minimal impact from the storm.

Hunter said a few trees were down, but response time was quick and there wasn’t any serious damage. The Beaufort County School District didn’t report any school delays or cancellations.

A tornado watch was in effect for four S.C. counties, including Hampton and Jasper, as well as several counties in Georgia, until 3 a.m. Monday. No tornadoes were reported locally.

Residents are advised to use extra caution when driving, especially if operating a high-profile vehicle, and to secure outdoor objects at homes and businesses.

To view the Palmetto Electric Outage Map, go to https://www.palmetto.coop/report-outage. 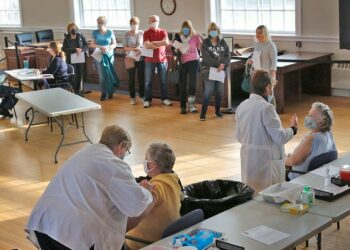